Cutaneous mucinosis – now known as Hereditary Cutaneous Hyaluronosis (HCH) — is a condition in which there is excessive amounts of a Jell-O®-like substance called hyaluronan (formerly “mucin”) in the dermis of the skin. While this condition is abnormal in other dog breeds, it appears to be normal in the Chinese Shar-Pei. In fact, the presence of hyaluronan gives the Shar-Pei its characteristic appearance. Some individuals are more severely affected than others, although treatment is seldom necessary. This condition is unique to the Chinese Shar-Pei and has several clinical presentations which can present separately or in combination as:

Hyaluronan (HA) also known as hyaluronic acid, hyaluronate and mucin is a polysaccharide composed of repeating disaccharides of glucuronic acid and N-acetylglucosamine. Hence hyaluronan belongs to the family of glycosaminoglycans. An HA molecule can be made up of hundreds to thousands of these repeat sugar units. HA tends to maintain the status of a viscoelastic solution or paste depending on the concentration and size of the molecules. These long molecules tend to aggregate into mesh works. In solution HA molecules assume a complex ribbon coil structure. A good analogy would be Jell-O®. When Jell-O® is diluted with too much water it is very soft and runny. If not enough water is added it becomes almost a solid. In like manner when HA molecules are in low concentration or of smaller size molecules they form a thick fluid; and when present in high concentration or longer size molecules they form a paste or semisolid substance. Thus HA has a very important structural function in the body and varies in consistency from a thicker tenacious fluid such as seen in joint fluid or in the skin of Shar-Pei (recall how “sticky” the fluid is in a skin laceration in the Shar-Pei) to a solid-type material as is seen in joint cartilage. Due to its structure HA also facilitates cell shape changes and movement of cells due to its role in the pericellular envelope which surrounds cells. The HA molecules are constantly changing their orientation much as a spring does.

HA is degraded by enzymes called hyaluronidases. Degradation normally occurs when HA enters the afferent lymph and is transported to the local lymph nodes. Oddly enoughStreptococcus bacteria produce hyaluronidase which may be a factor in the development of Streptococcal Toxic Shock Syndrome in the breed. When HA is degraded or broken down it tends to produce fragments of different sizes. Smaller fragments of HA stimulate angiogenesis (formation of blood vessels) and stimulate inflammatory responses such as up-regulation of cytokines, chemokines and adhesion molecules – these are all bad things. These smaller fragments signal the production of IL-1, TNF-a, IGF-1 and iNOS by macrophages which are pro-inflammatory substances as well. Larger fragments tend to promote cell stability and integrity, are anti-inflammatory and immunosuppressive.

HA interacts with cell surface receptors such as CD44, LYVE-1 (Lymphocytic endothelial hyaluronan receptor), RHAMM (Receptor for Hyaluronan-Mediated Motility) and many others. CD44 is the major HA cell surface receptor. It mediates cellular events involved in cell growth and differentiation. It is also a primary mediator of the uptake and degradation of HA in many cells. It has important functions in cell migration during morphogenesis, angiogenesis, tumor invasion and metastasis. LYVE-1 is an HA receptor confined to the lymphatic vessels and sinuses which are the main sites of HA degradation. RHAMM seems to play a role in cellular responses to injury, chronic inflammation and cellular transformation as occurs in cancer states.

Possible areas of research for hyaluronan:

Specific areas for potential research in the Shar-Pei might include:

An excellent web site with articles on hyaluronan can be found at GlycoForum/GlycoSquare, http://www.glycoforum.gr.jp/science/hyaluronan. 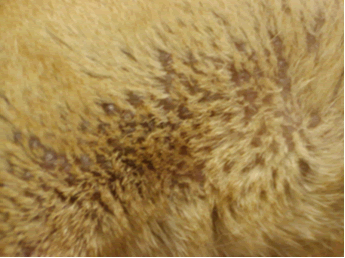