Shar-Pei are the only breed I associate with this condition and it is often confused with Swollen hock syndrome which occurs in conjunction with Familial Shar-Pei Fever (FSF).
3L disease is unilateral or bi-lateral NON-PAINFUL swelling of the ankle joint in the absence of a fever. In the past this swelling has been termed “socks”. I believe there are two main causes behind this condition, both centering on hyaluronan production in the tarsus and/or metatarsus (the anatomical region below the stifle or knee and above the rear foot). I believe three mechanisms are involved (1) increased production of LMW- HA, (2) damage/obstruction of lymphatic vessels and (3) formation of new lymphatic vessels may also be a mechanism for metastasis for tumor cells, especially in the case of mast cell neoplasia.
LYVE-1 (Lymphatic Vessel Endothelial HA Receptor-1) is a hyaluronan receptor in the lymphatic system. LYVE-1 is related to the other systemic HA receptor CD44. LYVE-1 is found in the lymphatic vessels, lymph nodes, spleen and the liver. It is expressed in the lymphatic vascular endothelial cells and the endothelial sinusoids of the lymph nodes, the liver and the spleen. LYVE-1 is important in facilitating HA transport from tissues via the lymph. Hyaluronan is degraded in lymph nodes, liver and spleen. It has also been discovered that LMW-HA induces lymph angiogenesis via LYVE-1 – mediated signaling. LMW-HA significantly increases lymphatic endothelial cell proliferation,
migration and tube formation in lymphatic vessels. LMW-HA also alters actin cytoskeleton rearrangement.

Allergic skin disease can result in swollen hocks due to trauma from chewing, licking, and scratching this area. Other signs of allergic skin disease are present as well such as rashes in “frictional” areas such as the axillary region (armpit), groin areas, feet, ears and anal area. The swelling is non-painful and not “hot”. I believe that chronic, repetitive trauma in this area damages the hyaluronan (HA) resulting in increased levels of LMW-HA. Low molecular weight HA is very pro-inflammatory resulting in tissue edema and increased production of HMW-HA. Often the inflammation results in “leaky hocks” in which the mucin actually drips from the skin. We know that prednisolone decreases HA production by fibroblasts as well as decreasing pruritis by stabilizing mast cells. A new drug, Apoquel® (oclacitinib) is a JAK inhibitor which blocks the itching pathway and has the advantage of not causing steroid side effects however it also is immunosuppressive. By decreasing the trauma to the skin, inflammation is reduced and the HA settles down. I tend to think of HA as a living organism that is temperamental – when it is happy it is in a HMW- HA state and non-inflammatory: when it is unhappy it is in a LMW-HA state and very inflammatory. 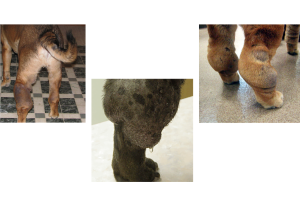