Way back in 1983 we first started recognizing episodic fevers in Shar-Pei often associated with a swollen, painful hock joint. Later on it was observed that an early-onset kidney failure occurred in many of these dogs as well. I remember many individuals, including myself, remarking that this has to be associated with the wrinkles in some way and now we know it does.

An important article was recently published in March, 2011, entitled ―A Novel Unstable Duplication Upstream of HAS2 Predisposes to a Breed-Defining Skin Phenotype and a Periodic Fever Syndrome in Chinese Shar-Pei Dogs‖, Mia Olsson et al. It is the product of a consortium of researchers from several countries, working in several laboratories and our own Dr. Linda Tintle. http://www.plosgenetics.org/article/ info:doi/10.1371/journal.pgen.1001332

The major points of the article are as follows:

It is likely a blood test may be available in the near future to screen Shar-Pei for their CNV number and the meatmouth mutation. Breeders can avoid using those individuals with high CNV numbers in their breeding programs to decrease the incidence of FSF and amyloidosis. This test may also be useful in the general Shar-Pei population to pick out those individuals who may be at risk for FSF +/- amyloidosis and thus implement prevention strategies such as good nutrition, use of anti-inflammatory supplements, control of ear and skin infections, etc. A possible blood test is being validated at this time.

A more general conclusion from this paper is the association of degree of wrinkling in American Shar-Pei with the incidence of FSF and amyloidosis. It is possible to retain the ―look‖ of the breed — there is not an absolute correlation between hyaluronan levels, the degree of wrinkling and the CNV number. A general guideline would be to only use those individuals with mild to moderate wrinkling in breeding programs and breed away from Hyper HA dogs. It would appear these guidelines are not necessary in the traditional (bonemouth) Chinese Shar-Pei. Lastly, the association of over-expression of HAS2 and autoinflammation most certainly has implications in the periodic fever syndromes in humans many of which are unexplained at this time.

I personally want to thank those of you who have donated funds to the CSPCA Charitable Trust and/or submitted blood samples from your dogs. Your support of health research in the Chinese Shar-Pei has reached fruition with the publication of this paper. Our own Dr. Linda Tintle who has been intimately involved in this research project is now doing validation studies of a potential blood test which may help breeders in their breeding programs avoid passing on the “meatmouth” duplication. Jeff Vidt, DVM (4/17/11) 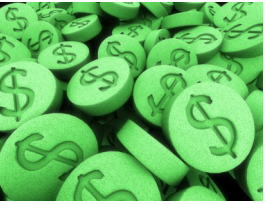 Up Date on Colchicine Availability

In October 2009, the FDA approved the first single-ingredient oral colchicine product, Colcrys®, for the treatment of Familial Mediterranean Fever (FMF) and acute gout flares. Oral colchicine has been used for centuries as an ―unapproved‖ drug before the FDA even existed. Benjamin Franklin used colchicine for his gout! Since URL Pharma received FDA approval for its colchicine product Colcrys® the price for the colchicine product went from 9¢/tablet to $5/tablet. The drug company and the FDA were notified of the use of colchicine in Chinese Shar-Pei with Familial Shar-Pei Fever to prevent systemic reactive amyloidosis which occurs in 5% of FSF dogs. This means 25% of the Chinese Shar-Pei in the United States were potentially put at risk for developing amyloidosis resulting in death due to the financial hardship placed on Shar-Pei owners. Communication with URL Pharma had indicated their refusal to allow the owners of Chinese Shar-Pei to participate in their Colcrys Patient Assistance Program. Besides being a demonstration of capitalism at its worst, this left many Shar-Pei owners with no options in the United States – ―approved ―colchicine is no good to anyone if it is unaffordable. The FDA had also responded to the situation by stating that it is a regulatory agency with no power to control pricing of pharmaceuticals. To that end I have been recommending that Shar-Pei owners ask their veterinarians for written prescriptions for colchicine to obtain colchicine from Canadian (or other foreign) pharmacies at a reasonable price. Another avenue would be compounding pharmacies. I had also recommended that Shar -Pei owners consider a boycott of URL Pharma, Inc., URL Distribution, Mutual Pharmaceutical company, Inc. and AR Scientific, Inc.

As of March 29, 2011 URL Pharma had announced that the FDA has given them permission to include owners of Chinese Shar-Pei dogs in their Patient Assistance Program (PAP). This program, the Colcrys PAP, is currently open to Shar-Pei owners only by phone at 1-888-811-8423 from 8:00 am to 6:00 pm Eastern Standard Time (EST) Monday through Friday. By the first week in April owners will also be able to apply online at www.needymeds.org. Applicants must provide a valid Colcrys prescription from a licensed veterinarian and must attest that Colcrys will be used only for their Shar-Pei dog. Applicants who qualify for the program will be able to select a 30-day supply (60 tablets), a 60-day supply (120 tablets) or a 90-day supply (180 tablets) of Colcrys. It is important to note that Colcrys is not FDAapproved for veterinary use and URL Pharma does not promote the use of Colcrys in animals. The application can be downloaded from my web site at www.drjwv.com.

The Shar-Pei fancy is to be congratulated in bringing the colchicine situation to the attention of URL Pharma and the FDA. I have no doubt your letters, E-mails, text messages, and phone calls had much to do with this dramatic turn of policy in both camps. I would like-wise urge you to communicate to both URL Pharma and the FDA our thanks and gratitude for helping our dogs. I would encourage members to E-mail Dr. Bernadette Dunham, Head of the Center for Veterinary Medicine at FDA Bernadette.Dunham@fda.hhs.gov, Dr. Janet Woodcock at the FDA Director, Center for Drug Evaluation and Research Janet.Woodcock@fda.hhs.gov and Dr. Margaret Hamburg at FDA Margaret.hamburg@fda.hhs.gov. Richard H. Roberts, MD, PhD is the President and Chief Executive Officer of URL Pharma and I would E-mail through Customer Service CustomerService@URLPharma.com. Let them know we appreciate their help for our dogs. 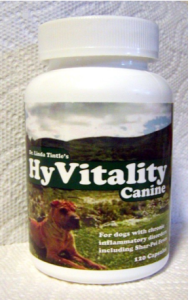 HyVitality™ is a nutritional supplement formulated by Dr. Linda Tintle a world-renowned Shar-Pei veterinarian and good friend of mine. She was one of the people who initially recognized Familial Shar-Pei and has been at the fore-front of research in this disease condition. She has chosen the anti-oxidants, minerals, vitamins and plant based supplements in this product to help maintain undamaged, high-molecular weight, healthy hyaluronan. We now know that FSF is an autoinflammatory disease and that the high levels of hyaluronan (mucin) which is responsible for the characteristic wrinkles of the breed can serve as a trigger for the fever episodes. We also know that hyaluronan can be involved in mast cell disease in the breed, kidney disease, histiocytosis and inflammatory disease in general. Ingredients include:

Alpha Lipoic Acid—an antioxidant which protects against reactive-oxygen species (ROS) which can lead to inflammation and fever.

Diosmin—a flavonoid which helps the lymphatic system , reduces edema and has antiinflammatory properties.

Magnesium—important in hyaluronan synthesis and a deficiency can be associated with signs of allergies, anxiety, tremors, personality changes and seizures.

Methylcobalamin—a form of vitamin B12. A deficiency can result in anemia, gastrointestinal and neurological disease. It also is a potent antioxidant.

Resveratrol—a natural substance that demonstrates antiinflammatory, anti-tumor, immunomodulatory and antioxidative properties. May be helpful in slowing down senility changes in the brain of older dogs.

We now stock this product at West Suburban Veterinary Associates and I recommend it for all my Shar-Pei clients. There also is a web site at www.HyVitality.com 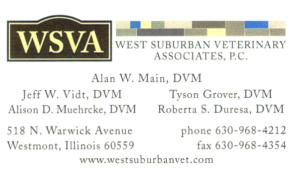