Lentigo
Lentigo is a genetic cause of hyperpigmentation. In dogs the condition occurs as black spots called lentigines which occur most commonly on the ventrum (underside of the trunk). These appear in mature dogs and can increase in number and size over a period of several months. They have been called “tar spots”, “age spots” or “pigment spots”. These are due to localized increases in the number of melanocytes (pigment cells) and melanosomes (pigment packages within the cells). I usually associate these with dilute pigmentation in Shar-Pei.

Postinflammatory hyperpigmentation
This is the most common form of hyperpigmentation. Dogs typically produce more pigment in or around areas of inflammation. I associate this type of pigmentation with the “elephant skin” seen with chronic bacterial pyoderma, chronic allergic skin disease, demodicosis, scabies, etc.

Hormonal hyperpigmentation
This is a diffuse skin hyperpigmentation seen in hypothyroidism, hyperadrenocorticism (Cushing’s disease), and sex hormone problems such as ovarian imbalance types I and II. The mechanism is unknown.

Vitiligo
This is a hereditary leukoderma (lack of pigment in the skin) in which the dogs develop somewhat symmetrical depigmentation especially of the nose, lips, mucous membranes of the mouth and facial skin. The onset of the condition is usually in young adulthood.

In some cases the pigment returns and in other cases the changes are permanent. In some cases antimelanocyte antibodies have been demonstrated. Successful treatment has not been reported. It does not appear to have consequences other than cosmetic.

Nasal depigmentation
This is a syndrome of unknown origin that may be a form of vitiligo. Also known as “Dudley nose” or “snow nose”. The dogs are normal at birth but the black of the nose fades to a chocolate brown or pinkish color. A few dogs recover spontaneously while in others the degree of pigmentation waxes and wanes, sometimes seasonally. 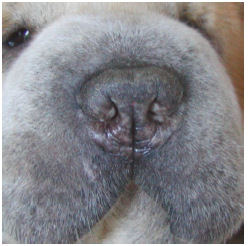 Mucocutaneous hypopigmentation
This is a hypopigmentation problem which can affect the nose, eyelids, lips, anus, tongue and oral cavity. This may be present from birth or develop in young adults. It is sometimes seasonal. Again the cause is unknown.

Tyrosinase deficiency
This condition has been reported in Chow Chows and seen in pups. The normal bluish black tongue turns pink and portions of the hair shafts turn white. The lining of the mouth may also rapidly depigment. The change in color is due to a deficiency of tyrosinase, the enzyme necessary to produce melanin (dark pigment). There is no effective treatment but the melanin reappears spontaneously in several months. I have not seen this in the Shar-Pei.

Contact reaction
Contact with a sensitizing material can result in depigmentation. I commonly associate depigmentation on the anterior (front) of the muzzle, chin or nose with plastic food/ water bowls. As the bowls age chemicals leach out and can result in a contact allergy problem.

In depigmentation cases other differentials that have to be considered include discoid lupus, nasal solar dermatitis, pemphigus conditions (autoimmune skin disease), uveodermatologic syndrome (Vogt-Koyanagi-Harada-like syndrome, VKH syndrome), systemic lupus erythematosus and others. These conditions can have more serious consequences.